One of the most popular cross-operating system runtime, Adobe AIR gives developers and individual Mac users a wide range of abilities for running web applications. It lets you create rich web apps using XML, HTML, Flex, and JavaScript. Overall, Adobe AIR is a multi-faceted and flexible tool for building and deploying web apps.

The AIR in-browser API lets you install and run AIR application from a web page. The AIR in-browser API is provided in a SWF library, air.swf, that is hosted by Adobe.The AIR SDK includes a sample “badge” application that uses this library to install, update, or launch an AIR application. Adobe AIR applications can be published as native phone applications on certain mobile operating systems, such as Android (ARM Cortex-A8 and above) and Apple iOS. In May 2017, Adobe stopped releasing AIR for Android, and the app was eventually removed from the Play Store in September 2018, but it can still be downloaded through their website.

Multiple use cases and deployment scope!

The perfect tool for developers to create and share rich web apps.

Since the rise of HTML5, Adobe has paid special attention to Flash Player development. At the same time, it hasn’t ignored Adobe AIR, which has been a prominent content-delivery system. The latest version comes with several improvements, including the revamped Stage 3D platform.

Adobe, short for Adobe Integrated Runtime, is a platform that allows you to run multiple applications across operating systems with a single-language code. As such, you don’t need to learn or use multiple coding languages.

Easy to get started

Adobe AIR has been famous for giving people the same user experience, whether on Linux, Windows, or Mac. Downloading and installing it is easy and hassle-free. In fact, if you install an AIR app without having installed the platform, you’ll be instantly prompted to download it.

Stage 3D is an excellent addition

With Stage 3D, Adobe AIR combines hardware-accelerated 3D and 2D graphics rendering. It’s up to 1,000 times faster than the previous versions. While Stage 3D is only available for Mac and Windows desktops, it will soon be available for mobile apps too.

Using Stage 3D, Mac users will be able to effortlessly work on complex graphics development. Some developers will be able to use this feature as a good alternative for special projects, especially for cross-platform collaboration.

The latest version of Adobe AIR includes better support for all kinds of device types. With captive runtime support, you will be able to combine AIR with several programs, thereby removing the need to separately install the platform. Additionally, native extensions can greatly improve Adobe AIR’s capabilities.

With Adobe AIR, developers can work on state-of-the-art animations using high-quality bitmap caching and support. Most importantly, graphics accelerated by 2D/3D GPU produce an advanced level of rendering. Currently, it’s the best on the market.

With Adobe Access technology, the content inside AIR packages is always fully protected. It’s a certified DRM protection algorithm working for a wide range of business models, such as subscription-based websites, e-commerce platforms, and video on demand apps.

Adobe AIR uses text compression and LZMA to optimize the code’s performance. Moreover, developers can use native extensions to call directly into the code. 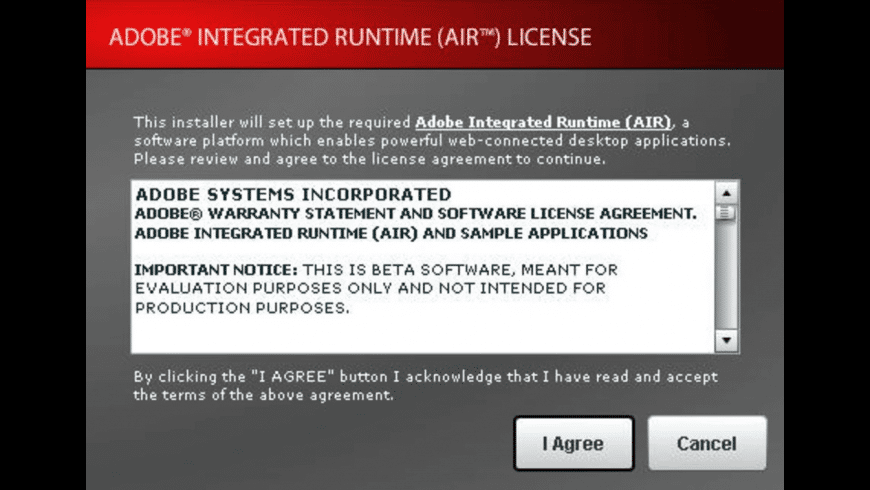 With the latest improvements, Adobe has been focused on turning AIR into an alternative development environment, while maintaining its overall relevance on the internet.

As mentioned earlier, native extensions allow you to directly call into platform-specific code. Additionally, you get access to free sets of native libraries through Adobe’s Game Developer Tools, which empower projects and capabilities.

While Adobe AIR is an excellent platform, the company hasn’t focused on promotion. Moreover, the unnecessary association with Flash isn’t helping the case. As a cross-platform development tool, AIR needs to be recognized as a standalone program, while including the virtues of Flash and other similar technologies.

Another drawback is the lack of a strong AIR community. While you’ll find plenty of resources to get help, there’s no communication between the community and Adobe developers. As such, many people are still unaware of the platform’s tremendous capabilities. In fact, some people still believe it’s the same as Flash, which isn’t the case.

For instance, a lot of developers think that Apple doesn’t accept web applications written with Adobe AIR. That’s not true! Adobe for mac flash player download. Having said that, an enthusiastic community for AIR already exists. Adobe just needs to stay connected with the people who’re part of the community.

Without a doubt, Adobe AIR is one of the most reliable runtime platforms to be used for building and deploying applications. With a clean interface, it manages to provide a compact, simple, and streamlined procedure.

Adobe AIR is available for Mac OS, Windows, Android, and iOS. For Mac OS, it is compatible with version 10.0 and above. AIR SDK development supports Mac OS 10.12 and above.

While Adobe AIR is a great choice, you might be looking for a few alternatives. Xcode, an IDE (integrated development environment) for testing, debugging, and developing apps is an amazing platform. It has a huge collection of software development tools, including the renowned Objective C Compiler by Apple. The only drawback is that Xcode creates apps that run only on Apple devices.

With Adobe AIR, developers can use Adobe Flash software, JavaScript, ActionScript, and HTML to build rich web applications. Since it builds and deploys standalone client applications, you don’t have to be limited by the constraints of a web browser. Overall, it’s an excellent platform available for Mac machines.

Yes, definitely! Adobe AIR is the perfect platform to unleash your creativity as a developer or designer. It allows you to work seamlessly in a flexible and consistent development environment. As such, you’re able to deliver a wide range of applications suitable for multiple platforms and devices. For building and deploying web applications, Adobe AIR will be an excellent choice.