Some DNLA software aka. UPnP software includes the ability to 'transcode' video and/or audio files from one format to another. So if you have a mixture of DNLA clients which do not all support the same format it can convert the files for those that need it. You may want to take this in to consideration when choosing a DNLA package for your Mac.

Buy Me a Coffee? Subscribe for More! PS3 Media Server: iMedia Share (iTunes). Click here to Download the Plex media server for Windows, Mac, Linux FreeBSD and more free today. Universal Media Server is a media server capable of serving videos, audio and images to any DLNA-capable device. It is free, regularly updated and has more features than any other media server, including paid media servers.

Before I get on to DNLA I would say that DNLA is old, poorly supported, poorly featured and I would advise if possible to avoid it. There are other approaches which you may decide are better for you but if not then move on to the DNLA answers below.

Firstly, other non-DNLA approaches. The premier approach for doing multi-room audio is to buy a Sonos system. With this you either buy Sonos speakers e.g. Play:3 or you buy a Sonos Connect which allows you to plug in to an existing amplifier. Sonos supports all the audio formats supported by iTunes including Apple Lossless which is going to be the best format to use if possible. While Sonos is the market leader there are other brands offering similar solutions. Examples of other similar systems to Sonos include Logitech Squeezebox, Roku SoundBridge (discontinued), an Apple TV3 or TV4, etc. All these support Apple Lossless and all allow different rooms to play different tracks at the same time.

A second approach is to use Apple's AirPlay standard, many AV Receivers now support AirPlay if you have a network interface on your AV Receiver which these days is either standard or an option on most. iTunes would then stream directly to the AV Receiver using the AirPlay standard.

A third similar approach is to get one or more AirPort Express WiFi base-stations, these have an audio out connector, you AirPlay from iTunes to the AirPort Express and it outputs via its audio connector to the attached audio device which could be speakers or an AV Receiver.

Now there is a limitation with AirPlay, a single iTunes can only output via AirPlay the same content to one or more AirPlay destinations, if you want to play multiple different music tracks at the same time then this is where Sonos and similar solutions win hands down. The iTunes however can be a Mac, or Windows, or an iPhone, or an iPad.

Moving on to DNLA. You are probably going to find many DNLA servers for the Mac are either discontinued, or semi-discontinued in that they have not had a recent update and therefore may have problems with newer versions of OS X, or only work with some clients, or do not do Transcoding well or at all. In other words like DNLA as a whole it is rather a mess. You will therefore find that you may have to buy a commercial DNLA package although this will be still cheaper than say buying a multi-room Sonos setup. I would advise testing the trial versions, make sure to remove each before trying the next. 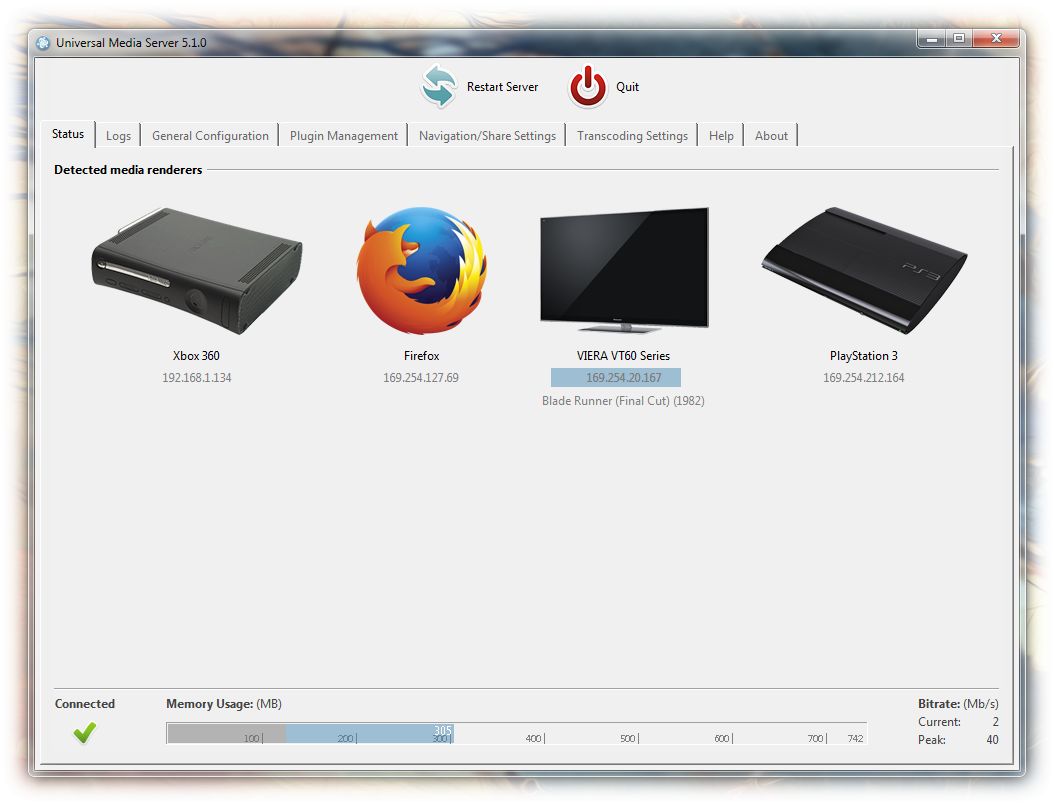 With no particular sentiments, have a look at the following.

If you have a large collection of local photos, music and videos, you may want to access these media files on all your devices, such as desktop PC, laptop, streaming boxes, smart TV, smart phones, tablets, etc.

Connecting PC to your TV is dead simple. It’s just an HDMI cable away. All you need is an HDMI cable provided both your PC and TV have the HDMI port, the HDMI-out port on PC and the HDMI-in port on TV. What you need to do is connecting one end of the HDMI cable to the HDMI-out port on your PC and the other end to the HDMI-in port on the TV. On your TV side, choose the input source to the connected HDMI port. An HDMI cable is not expensive. Before you buy one, you need to choose the HDMI version, HDMI 1.4, 2.0 or both supported, and cable length. You may need a VGA cable if your computer or TV is old. If you do not have an applicable cable for wired connection and screencast between PC and TV, you can refer to following wireless video streaming solutions.

If your PC and TV are DLNA-enabled, you can directly play media files from computer on to TV big screen without any cable. See this step-by-step guide to cast photos, music and videos from PC to TV using the system built-in programs in Windows 10. No need any third-party software required.

Today, we will talk about how you can set up DLNA or UPNP media streaming server on Windows 10 computer so you can access media content from any other devices. For example, you can access and play music and movies stored on your PC from your mobile phone without replying on copying these media files from computer to cell phone.

Microsoft Windows Media Player can still be found in Windows 10, although not updated for couple of years. Run Windows Media Player on your PC, select Stream on the toolbar, and choose “Automatically allow devices to play my media“, you will be prompted to select the shared folder, library and device, select and share Photo, Video and/or Music.

In Windows Media Player, select “More streaming options” on its toolbar, where you can choose which PCs and devices are allowed to access the shared content on your computer. If you see some unknown devices, in this device list, click on it to open its properties dialogue, you can then find out its Mac address and IP address. Every device in your local network has its unique Mac and IP addresses. For example, you can follow this guide to find out IP address on Windows 10 computer.

Right click on the Start button at the bottom left corner on your Windows 10 PC, choose Control Panel from the pop-up menu, then search “media” without the quotes at the top right corner of the Control Panel home screen. Access for the mac. Click the “Media streaming options” link in the Network and Sharing Center section. Follow on-screen tips to turn on media streaming, name your media library, allow devices to access your shared media, select media type(s) to share and finally finish the setup of media streaming server on Windows 10 computer.

When you have turned on media streaming and authorized the devices in Windows Media Player, you need to choose what songs, pictures and movies that can be streamed over the network. By default, all the music that you load in the “My Music”, photos in the “My Pictures”, and movies in the “My Videos” folders gets added to your PC’s media library. If you want to add more media files saved in other locations or folders to share and make them available to any other devices on your network, you do not have to move or copy the actual media files to the current media library folders. You can add new folders to the libraries instead. To do that, run Windows Media Player for Windows 10, then click the Organize button and choose Manage Libraries from the drop-down menu. In the sub-menu, you will find four media types: Music, Videos, Pictures, and Recorded TV. Choose the media type first, then go to add new folders and locations to be monitored for that type of media and add more photos, videos, and/or songs to the media libraries of Windows Media Player and media server on your Windows 10 computer.