Open Finder and find the app you want to install. Next, press the Control key and click. Open a Mac app from an unidentified developer. If you try to open an app that isn’t registered with Apple by an identified developer, you get a warning dialog. This doesn’t necessarily mean that something’s wrong with the app. For example, some apps were written before developer ID registration began.

If you’ve ever tried to open an app from an unidentified developer on your Mac, you know that it can be a tricky task. macOS has security measures in place that block this action in the hopes of protecting you from malware. That being said, it’s not impossible.

Here, we’ll talk about apps from unidentified developers and show you how to allow them on your Mac. We’ll also go over some tips for staying safe when downloading new software.

What is an unidentified developer?

Apple believes that one of the easiest ways to distribute malware is to insert its code into an app. That’s why they check apps thoroughly before allowing them to release to the Mac App Store. Apps from unidentified developers aren’t on the App Store.

This doesn’t mean that apps from unidentified developers are malicious (although they can be). They can either not comply with Apple guidelines, or be created before the ID registration started.

Why your Mac shows a warning?

In order to protect your device from dangerous apps, Apple includes security measures in their devices. One example of this is Gatekeeper. Gatekeeper is Apple’s program that recognizes whether an app has been downloaded from the App Store. This program warns you when you’ve downloaded and attempted to run software from another location for the first time.

When you receive a warning about an app, it’s because Gatekeeper flagged it as a potentially dangerous app. This doesn’t necessarily mean that the app has malware—it simply means that macOS doesn’t recognize the app (or the developer). Because of this, you won’t be able to open the app as easily as you would an app that’s been vetted and listed on the App Store.

Luckily, it’s a bit easier to download apps from unidentified developers onto your Mac than onto other Apple devices.

How to set your Mac to allow apps from unidentified developers

By default, your Mac is set to block you from opening apps that haven’t been verified by Gatekeeper. This includes both apps that aren’t from the Apple App Store and those that come from unidentified developers.

It’s a good idea to start by first setting your Mac to allow you to open apps that aren’t from the App Store.

Setting your Mac to open apps not from App Store

By setting your Mac to open apps that aren’t from the App Store, you reduce the number of warnings you’ll get when opening third-party applications. This makes it much easier to open these kinds of apps.

Here’s how to change your Mac settings to allow apps from third-party locations:

Setting your Mac to open apps from unidentified developers

If you want your Mac to allow apps from unidentified developers, you’ll have to follow a few additional steps. Firstly, try to open the unrecognized application. You’ll see a notification that it can’t be opened. Then, follow the instructions:

Apple’s recommended way to open apps from an unidentified developer

Following these steps will make this app an exception, allowing you to open it again.

Earlier versions of macOS used to provide the option to “allow apps from anywhere.” This would allow you to open any app without having to go through the above steps for each one you’d like to open.

While convenient, this can be dangerous, as it can leave your Mac open to malware. This is likely why it’s been hidden as a readily available option.

Are apps from unidentified developers safe?

Because they require circumventing Apple’s default security vetting process, it’s harder to determine whether apps from unidentified developers are safe. You’ll need to be sure yourself that a particular app can be trusted.

The best you can do to ensure that an app is safe to open is to do your research on it. Read through some reviews and look into the experiences other users have had with the app, as these sources are the most likely to give you truthful and relevant information. Dig as deeply as you can to help avoid downloading any dodgy apps.

You should also ensure that you have antivirus software (and that it’s up to date). This adds an extra layer of protection to your Mac. If you find that an app isn’t trustworthy, opt for an alternative app in the App Store or one from an unidentified developer that you can trust.

Downloaded a suspicious app? CleanMyMac X allows you to check your Mac for potentially unwanted apps (PUA) and malware with its Malware Removal Module. This feature scans your Mac for malicious apps and allows you to delete them one-by-one or in bulk. CleanMyMac X also features a real-time malware monitor to help you keep track of whether you’re not downloading anything malicious.

Here’s how to use it:

If CleanMyMac X has found any threats, press Remove to delete them. Additionally, you can free lots of space on your Mac by deleting outdated cache files, system log files, and other unused junk with the System Junk feature.

Now, you know how to install any app on your Mac and circumvent the restrictions. But, if you aren’t vigilant enough, you may need to deal with the consequences of malicious software. It’s a good idea to always question the apps you want to install and look for additional reviews and testimonials.

I have the Gatekeeper set to only open applications from the App Store and from identified developers.

Preview is my default application for opening pdf-files.

I have downloaded some pdf's which I want to open in another app, (PDFpen, Safari, ..)

(By double clicking on these files they open in Preview without any problems).

I then select the files and use the Finders Show Inspector (or Get Info)-command to change the 'Open with'-app to PDFpen (or Safari or..)

When I then double click on one of the pdf-files I get a warning message: 'filename.pdf' can't be opened because it is from an unidentified developer. (See attached image).

I then right-click on the file and choose Open With (PDFpen, Safari, ..), and get a new warning message, but now with an option to open the file, which I then do.

After opening the file just once, there is no more problems, I can open the file by double clicking, and it opens in the app I have chosen for that file. BUT this only applies to that particular file. Each separate pdf-file requires the same procedure.. 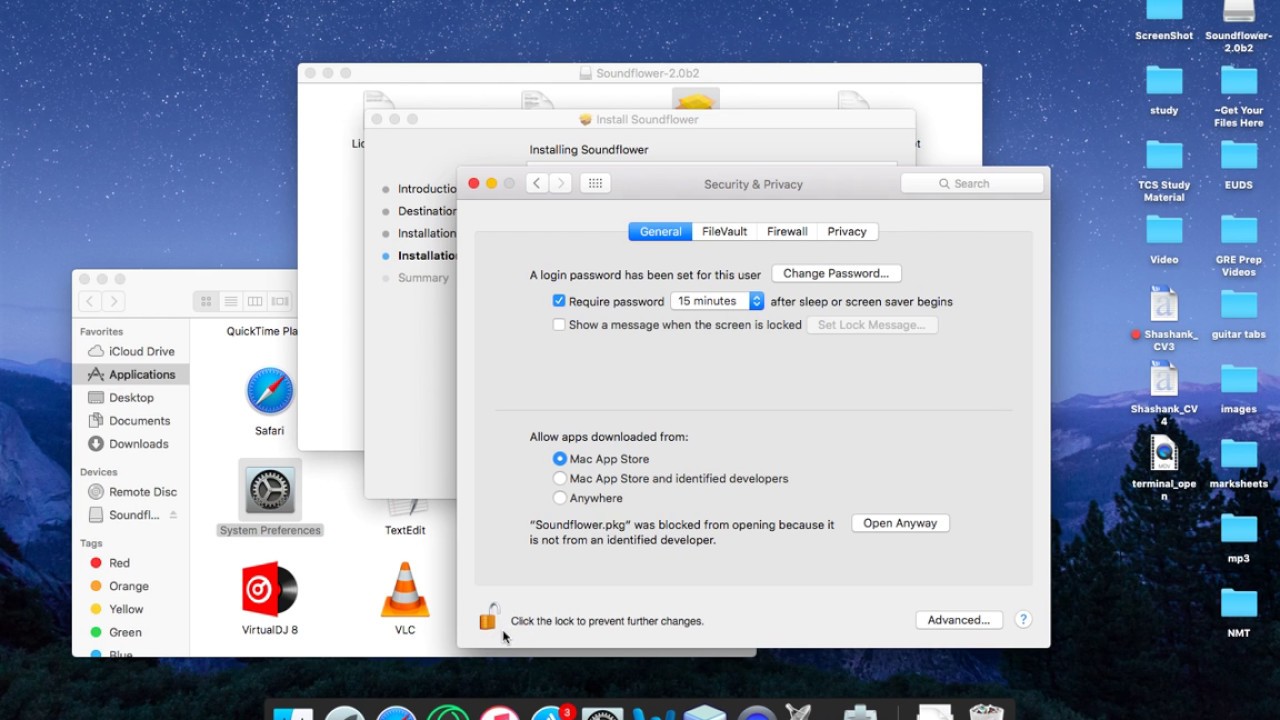 I have seen the same problem on 3 different mac's running Yosemite.

If I export a Pages- or Numbers-document, the created pdf-file behaves in the save manner, but a pdf created by export from MS Word (ver 14.2.5) can be opened in any desired application by double-clicking.